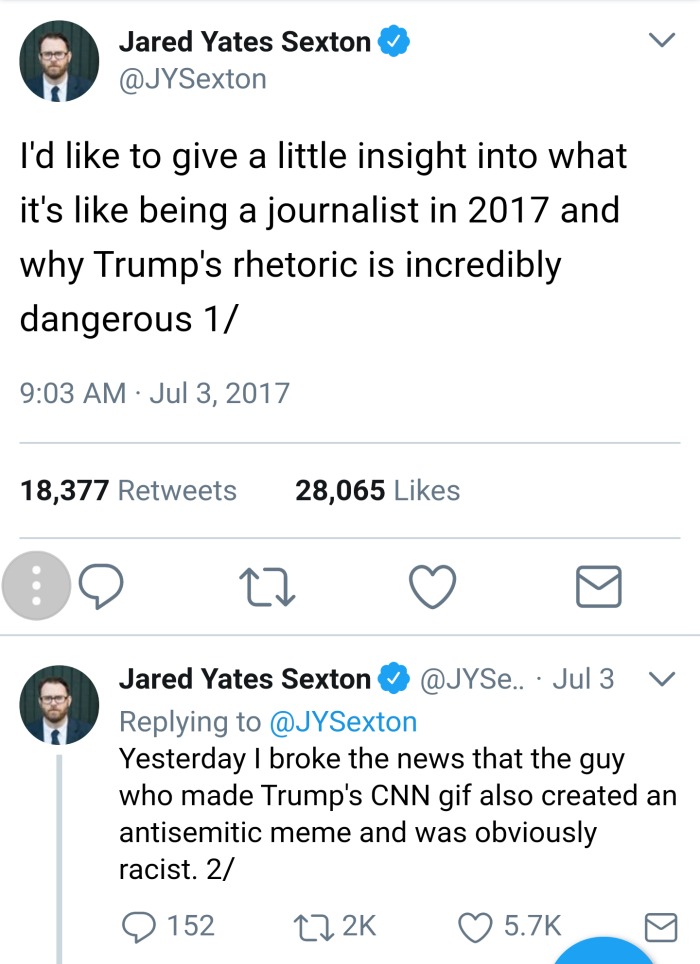 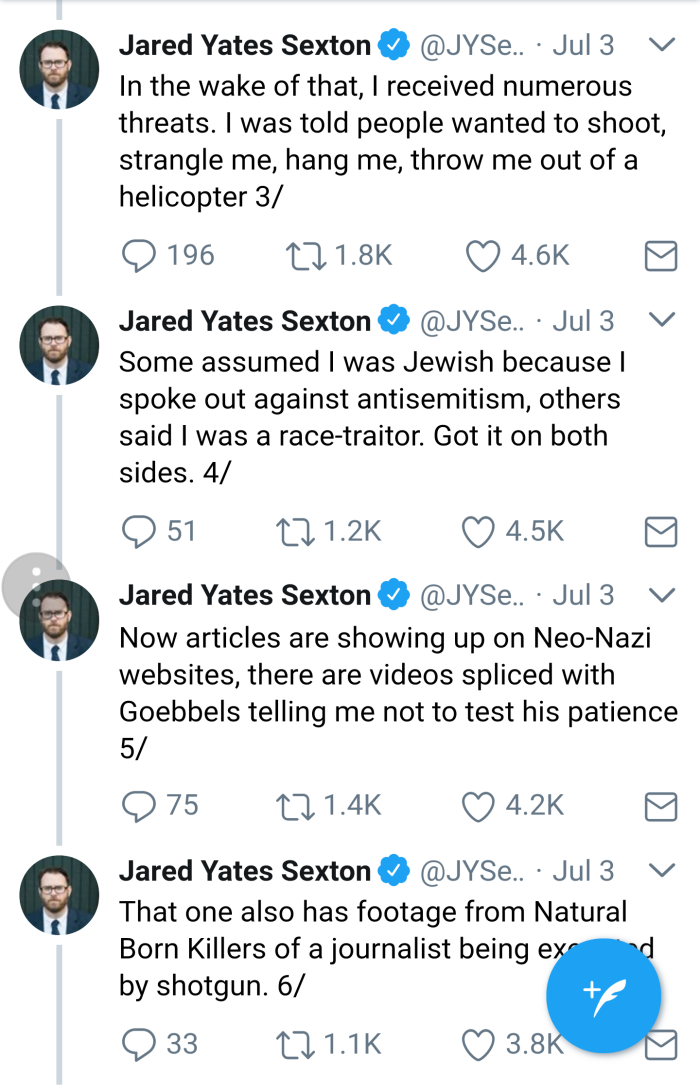 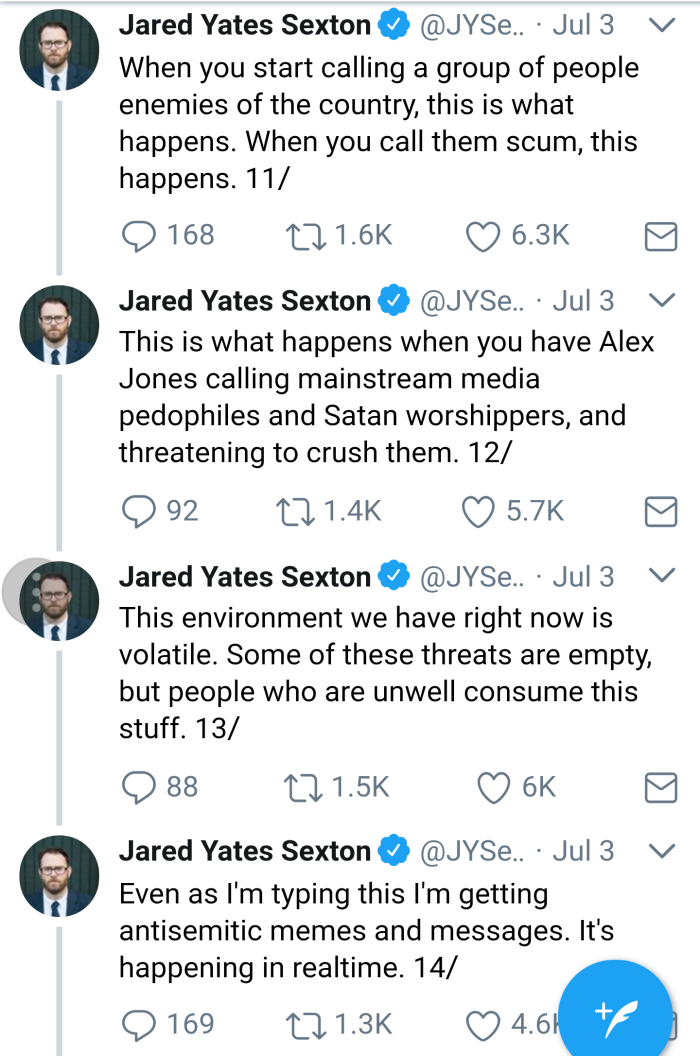 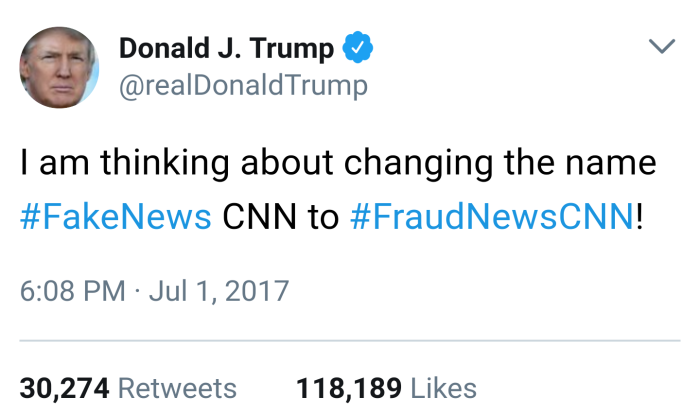 The most effectual engines for [pacifying a nation] are the public papers… [A despotic] government always [keeps] a kind of standing army of newswriters who, without any regard to truth or to what should be like truth, [invent] and put into the papers whatever might serve the ministers. This suffices with the mass of the people who have no means of distinguishing the false from the true paragraphs of a newspaper.  —Thomas Jefferson to G.K. Van Hogendorp, October 13, 1785

Our liberty cannot be guarded but by the freedom of the press, nor that be limited without danger of losing it. —Thomas Jefferson to John Jay, January 25, 1786.

That Time I Got Recruited to Collude with the Russians, Lawfare

Over the course of our conversations, one thing struck me [Matt Tait] as particularly disturbing. Smith and I talked several times about the DNC hack, and I expressed my view that the hack had likely been orchestrated by Russia and that the Kremlin was using the stolen documents as part of an influence campaign against the United States. I explained that if someone had contacted him via the “Dark Web” with Clinton’s personal emails, he should take very seriously the possibility that this may have been part of a wider Russian campaign against the United States. And I said he need not take my word for it, pointing to a number of occasions where US officials had made it clear that this was the view of the U.S. intelligence community as well.

Smith, however, didn’t seem to care. From his perspective it didn’t matter who had taken the emails, or their motives for doing so. He never expressed to me any discomfort with the possibility that the emails he was seeking were potentially from a Russian front, a likelihood he was happy to acknowledge. If they were genuine, they would hurt Clinton’s chances, and therefore help Trump.

…It is no overstatement to say that my conversations with Smith shocked me. Given the amount of media attention given at the time to the likely involvement of the Russian government in the DNC hack, it seemed mind-boggling for the Trump campaign—or for this offshoot of it—to be actively seeking those emails. To me this felt really wrong.

In my conversations with Smith and his colleague, I tried to stress this point: if this dark web contact is a front for the Russian government, you really don’t want to play this game. But they were not discouraged. They appeared to be convinced of the need to obtain Clinton’s private emails and make them public, and they had a reckless lack of interest in whether the emails came from a Russian cut-out. Indeed, they made it quite clear to me that it made no difference to them who hacked the emails or why they did so, only that the emails be found and made public before the election.

He had one last thing to say, about judgment. He read the Bible verse he had written down the night before from the Gospel of Matthew, which describes what Jesus will say to those who professed his name but failed him.

He looked up from his notes at the audience.

He gathered his outline.

“Anyway,” he said. “I’m not going to talk about anything else.”

He sat down. He was exhausted.

One of the Justice Department’s top corporate crime watchdogs has resigned, declaring that she cannot enforce ethics laws against companies while, she asserts, her own bosses in the Trump administration have been engaging in conduct that she said she would never tolerate in corporations.

Hui Chen — a former Pfizer and Microsoft lawyer who also was a federal prosecutor — had been the department’s compliance counsel. She left the department in June and broke her silence about her move in a recent LinkedIn post that sounded an alarm about the Trump administration’s behavior.

“Trying to hold companies to standards that our current administration is not living up to was creating a cognitive dissonance that I could not overcome,” Chen wrote. “To sit across the table from companies and question how committed they were to ethics and compliance felt not only hypocritical, but very much like shuffling the deck chair on the Titanic. Even as I engaged in those questioning and evaluations, on my mind were the numerous lawsuits pending against the President of the United States for everything from violations of the Constitution to conflict of interest, the ongoing investigations of potentially treasonous conducts, and the investigators and prosecutors fired for their pursuits of principles and facts. Those are conducts I would not tolerate seeing in a company, yet I worked under an administration that engaged in exactly those conduct. I wanted no more part in it.”

Chen came to the Justice Department in 2015, after officials there created a compliance counsel position to help guide the agency’s enforcement of criminal laws against corporations.

A department announcement at the time said Chen would guide the fraud section of the Criminal Division in “the prosecution of business entities, including the existence and effectiveness of any compliance program that a company had in place at the time of the conduct giving rise to the prospect of criminal charges, and whether the corporation has taken meaningful remedial action.” The release also said Chen would help the department make sure that corporations who had negotiated agreements with prosecutors were following through on their commitments to stop violating laws.

Out of the blue I [David Brooks] asked, “Have you ever read Reinhold Niebuhr?”

Obama’s tone changed. “I love him. He’s one of my favorite philosophers.”

So I asked, What do you take away from him?

“I take away,” Obama answered in a rush of words, “the compelling idea that there’s serious evil in the world, and hardship and pain. And we should be humble and modest in our belief we can eliminate those things. But we shouldn’t use that as an excuse for cynicism and inaction. I take away … the sense we have to make these efforts knowing they are hard, and not swinging from naïve idealism to bitter realism.”

I love America more than any other country in this world, and, exactly for this reason, I insist on the right to criticize her perpetually.
~James A. Baldwin