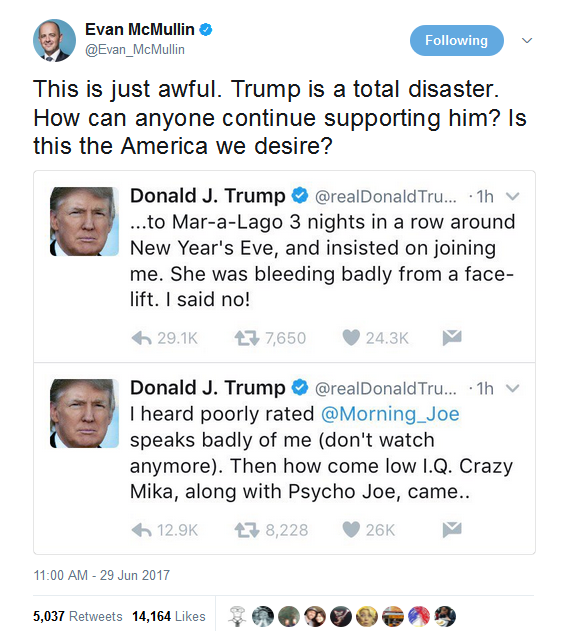 The landscape has changed such that I agree with Charles Krauthammer for the first time in recent memory:

Mercedes Schlapp pushed back, pointing out that Trump is not shutting down the press or using military force to silence his critics, as those dictators did.

“When you defend the president of the United States by pointing out that he hasn’t sent the tanks out in the streets to shut down the media, you’ve reached a fairly low level of defense,” Krauthammer replied.

He added it’s not just the fact that Trump’s Twitter remarks are an embarrassment and a distraction, but also that they give an unfiltered, uncensored look at Trump’s psyche.

“What we’re seeing is a vindictiveness, a cruelty, a lack of temperedness, a lack of self-control which is truly shocking,” Krauthammer said. “And that’s what I think people are reacting to.”

Anyways. We’re six months into this slow-motion trainwreck. The WSJ just reported the first concrete (not confirmed) evidence of collusion between the Trump presidential campaign and Russia [see below]. Trump remains a sexist jerk. There’s still hundreds of high level government positions remaining unfilled. Our Ambassador to the UN is praising huge cuts to the peacekeeping budget on twitter. Jared Kushner was discovered to have received a $285 million loan from a bank “negotiating to settle a federal mortgage fraud case and charges from New York state regulators that it aided a possible Russian money-laundering scheme” just before election day; he’s allegedly hired a lawyer to represent him “in inquiries linked to Russia.” Meanwhile, lets not forget that our AG lied to the Senate.

It’s enough to make you want to scream.

These stories are important, though. This is no time to turn away. Pay attention — then call your representatives.

Without further ado, an abbreviated update from the swamp:

—> check out Lawfare’s useful commentary regarding the WSJ collusion reporting

Trump’s voter-fraud commission wants to know voting history, party ID and address of every voter in the U.S. (WaPo)

In May, Trump created a commission to investigate alleged acts of voter fraud after he claimed, without evidence, that 3 million to 5 million undocumented immigrants voted illegally in the 2016 election. The commission is chaired by Kobach, who is the Kansas secretary of state and a voter-fraud hard-liner.

Earlier this month, a federal judge fined Kobach $1,000 for “presenting misleading arguments in a voting-related lawsuit,” according to Politico.

Advocates for voting rights and civil liberties are also sounding alarms over the letter. “The concern is that this is going to be used to justify regressive and disenfranchising federal law,” Myrna Pérez, deputy director of the democracy program at New York University Law School’s Brennan Center for Justice, said in an interview.

This move is particularly worrisome given reports that suspected Russian hackers attempted to access voter-registration systems in more than 20 states during the 2016 election.

Mixing Business and the Presidency, Trump to Hold Fundraiser at his Washington Hotel (NPR)

“There’s nothing flat-out illegal about it, but it’s pay-to-play,” said Richard Painter, former White House ethics counsel in the George W. Bush administration and a critic of Trump’s ethical standards.

A Time magazine with Trump on the cover hangs in his golf clubs. It’s fake. (WaPo)

The cover seems to fit a broader pattern for Trump, who has often boasted of his appearances on Time’s cover and adorned his Trump Tower office with images of himself from magazines and newspapers. Trump has made claims about himself — about his charitable giving, his business success, even the size of the crowd at his inauguration — that are not supported by the facts.

The Trump administration’s top environmental official met privately with the chief executive of Dow Chemical shortly before reversing his agency’s push to ban a widely used pesticide after health studies showed it can harm children’s brains, according to records obtained by The Associated Press.

In a recent closed-door briefing on Capitol Hill, National Security Agency Director Mike Rogers expressed frustration to lawmakers about his inability to convince the President to accept US intelligence that Russia meddled in the election, according to a congressional source familiar with the meeting.

…Former US Ambassador to NATO Nicholas Burns, testifying in front of the Senate intelligence committee Wednesday, faulted Obama for failing to take action against Russia more quickly when he was president. But he unleashed his fury at Trump for doing so little to curtail Russian aggression.

“It is his duty, President Trump’s, to be skeptical of Russia. It’s his duty to investigate and defend our country against a cyber offensive because Russia is our most dangerous adversary in the world today,” said Burns, a career foreign service officer who has served under presidents of both parties. “And if he continues to refuse to act it’s a dereliction of the basic duty to defend the country.”

On 14 June the Senate passed a bill, with a 98-2 vote, that would strengthen sanctions on Russia and require congressional approval for any administration attempt to roll them back. The bill has since been stalled in the House over technicalities amid reports that Trump’s allies are seeking to water it down.

Soon afterward, Siskind began keeping what she calls the Weekly List, tracking all the ways in which she saw America’s taken-for-granted governmental norms changing in the Trump era.

The project started small, read by friends and with only a few items a week.

“It blew up — I had 2 million views that week,” she said. “People were responding like crazy, saying things like, ‘I’m praying for you.’ ”

As time went on, the list grew much longer and more sophisticated. Here are three of her 85 items from mid-June:

●“Monday, in a bizarre display in front of cameras, Trump’s cabinet members took turns praising him.”

●“AP reported that a company that partners with both Trump and (son-in-law) Jared Kushner is a finalist for a $1.7bn contract to build the new FBI building.

●Vice President Pence hired a big-name “lawyer with Watergate experience to represent him in the Russian probe.”

Now, in Week 32, every item has a source link, and rather than just a few items, there are dozens. (Her weekly audience usually hits hundreds of thousands, she said, on platforms including Medium, Facebook and Twitter.)

The idea, she said, came from her post-election reading about how authoritarian governments take hold — often with incremental changes that seem shocking at first but quickly become normalized. Each post begins with: “Experts in authoritarianism advise to keep a list of things subtly changing around you, so you’ll remember.”

…“It’s scary to look back on the early weeks and see what we’ve already gotten used to,” she said. Examples: a secretary of state who rarely speaks publicly, the failure to fill important positions in many agencies, a president who often eschews intelligence briefings in favor of “Fox & Friends.”

How long does she plan to keep up the list-making? “Until he’s out of power,” she said, which she believes — and fervently hopes — will happen before the end of the first presidential term.“I don’t have a grand plan,” she said. “I just want to be able to trace our way back.”