If Trump were to dismiss Comey before the investigation into Russia’s election tampering is completed, the move would be similar to President Richard Nixon’s firing of Watergate Special Prosecutor Archibald Cox in 1973. In what became known as the Saturday Night Massacre, Nixon’s attorney general, Elliot Richardson, and deputy attorney general, William Ruckelshaus, both resigned when Nixon asked them to fire Cox. Solicitor General Robert Bork ultimately handled the dismissal. The ordeal “set loose a series of fresh convulsions that shook his scandal-ridden government to its foundations,” Newsweek reported in a cover story at the time.

President Trump on Tuesday fired the director of the F.B.I., James B. Comey, abruptly terminating the top official leading a criminal investigation into whether Mr. Trump’s advisers colluded with the Russian government to steer the outcome of the 2016 presidential election.

The stunning development in Mr. Trump’s presidency raised the specter of political interference by a sitting president into an existing investigation by the nation’s leading law enforcement agency.

…Mr. Comey learned from news reports that he had been fired while addressing bureau employees in Los Angeles. While Mr. Comey spoke, television screens in the background began flashing the news. In response to the reports, Mr. Comey laughed, saying that he thought it was a fairly funny prank. Shortly after, Mr. Trump’s letter was delivered to F.B.I. Headquarters in Washington.

…Mr. Trump had already fired his acting attorney general for insubordination and his national security adviser for lying to Vice President Mike Pence about contacts with Russians. But firing Mr. Comey raises much deeper questions about the independence of the F.B.I. and the future of its investigations under Mr. Trump.

In an instance of bizarre timing and optics, the White House announced late Tuesday night that Mr. Trump would meet on Wednesday in the Oval Office with Sergey V. Lavrov, Russia’s foreign minister.

F.B.I. agents were enraged by the firing and worried openly that Mr. Trump would appoint a White House ally to lead them. Mr. Comey was widely liked in the F.B.I., even by those who criticized his handling of the Clinton investigation. Agents regarded him as a good manager and an independent director.

…A longtime prosecutor who served as the deputy attorney general during the George W. Bush administration, Mr. Comey came into office in 2013 with widespread bipartisan support. The defining moment in Mr. Comey’s career — until Tuesday night — came in 2004 during a hospital room standoff with White House officials who wanted to pressure the Justice Department to reauthorize a secret wiretapping program. Mr. Comey stood his ground.

The Nightmare Scenario: Trump Fires Comey, the One Man Who Would Stand Up To Him (Lawfare)

The FBI Director serves a ten-year term precisely in order to insulate against the whims of a President who does not like what—or whom—the FBI is investigating. While the President has legal authority to fire an FBI director, the fact that Trump has done so under circumstances of an active FBI investigation of the President’s own campaign violates profoundly important norms of an independent, non-political FBI. The situation has no parallel with the only previous FBI director to be removed by a president: President Clinton’s firing of William Sessions, whose ethical misconduct was so extensive that it resulted in a six-month Justice Department investigation and a blistering 161-page report detailing his illicit activities, including flagrant misuse of public funds. Trump’s firing Comey at a time when Comey is investigating Russian intervention in the election on Trump’s behalf and the specific conduct of a number of people close to Trump undermines the credibility of his own presidency. And it deeply threatens the integrity of and public confidence in ongoing law enforcement and intelligence operations.

The National Security Law Podcast: On The Firing of Jim Comey (Lawfare)

Days before he was fired, James B. Comey, the former F.B.I. director, asked the Justice Department for a significant increase in resources for the bureau’s investigation into Russia’s interference in the presidential election, according to four congressional officials, including Senator Richard J. Durbin.
Mr. Comey made his appeal to Rod J. Rosenstein, the deputy attorney general, who also wrote the Justice Department’s memo that was used to justify the firing of Mr. Comey this week, the officials said.

Another official familiar with the briefing — which included Senate Intelligence Committee leaders Richard Burr and Mark Warner along with Comey — said it came after weeks of bipartisan pressure from the two leaders for the FBI to speed up the Russia probe. This official said the conversation was nuanced and that Comey told the senators that the inquiry had been effectively stalled due to a lack of access to prosecutors and because there was no one at the Justice Department to guide the probe forward.

[^keep in mind here that the head of the Department of Justice, Jeff Sessions, lied under oath to the Senate about his contact with Russian officials during the campaign, recused himself from the Russia probe, and yet somehow was also able to recommend to Trump that Comey be fired]

‘Enough Was Enough’: How Festering Anger at Comey Ended in his Firing (NYTimes)

Mr. Trump, according to people close to the president, had been openly talking about firing Mr. Comey for at least a week. Despite the objections from some of his aides about the optics and the lack of an obvious successor, the grumbling evolved into a tentative plan as he angrily watched the Sunday news shows at his Bedminster, N.J., golf resort.

By Monday, capping off months of festering grievances, Mr. Trump told people around him that he wanted Mr. Comey gone, repeatedly questioning Mr. Comey’s fitness for the job and telling aides there was “something wrong” with him, several people familiar with the discussions said.

…Roger J. Stone Jr., a longtime informal adviser to Mr. Trump who has been under F.B.I. scrutiny as part of the bureau’s investigation into possible ties between the Trump campaign and Russian officials, was among those who urged the president to fire Mr. Comey, people briefed on the discussions said.

How Abnormal Was Comey’s Firing? Experts Weigh In (NYTimes) 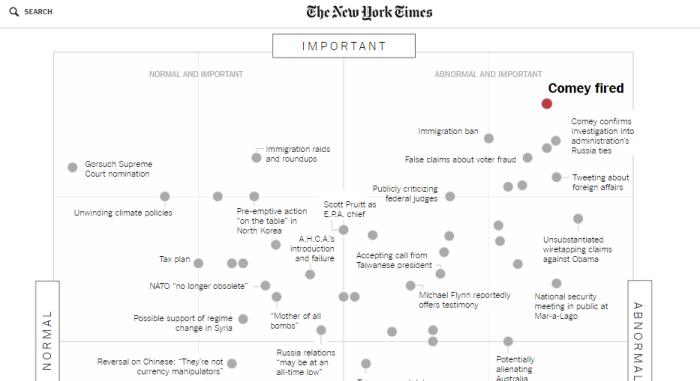 How it was done: The problem is not only that Trump fired Comey, but how he did it (Lawfare)

The question of how the White House did this—the process followed and the explanation provided—tends to be of secondary concern in the analysis so far. The “how” issues are seen mainly as examples of botched political judgment or public communications strategy, or as clues to the real motives behind the action. This is a mistake. How Mr. Trump went about this firing has implications as profound as the action itself for the rule of law in his Administration.

…On display here is a failure to appreciate the importance in this administration of process and attention to form in upholding the rule of law. It is not the only example. The President’s approach to the organization of his business affairs is not dissimilar. He has locked horns with the Director of the Office of Government Ethics, volunteered his own (incomplete and misleading) judgment of what constitutes his obligation to avoid conflicts of interest, and established a controversial “trust” managed by private lawyers and notable for its lack of transparency. That Mr. Trump confronted unusual complications in managing these conflicts might be granted. How he manages them becomes, then, critical, and it on the “how” question that this government so often routinely founders.

Twitter accounts held by the Russian Ministry of Foreign Affairs and the Russian Embassy provided a running commentary of highlights from Lavrov’s Washington visit, including Lavrov’s jibes with reporter’s at the State Department regarding FBI Director James Comey’s firing. 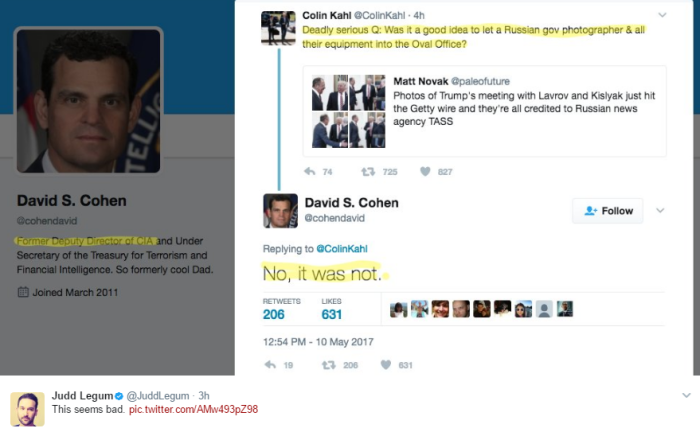 David Cohen [“Former Deputy Director of CIA and Under Secretary of the Treasury for Terrorism and Financial Intelligence”]: “No, it was not.”

Make of that what you will.